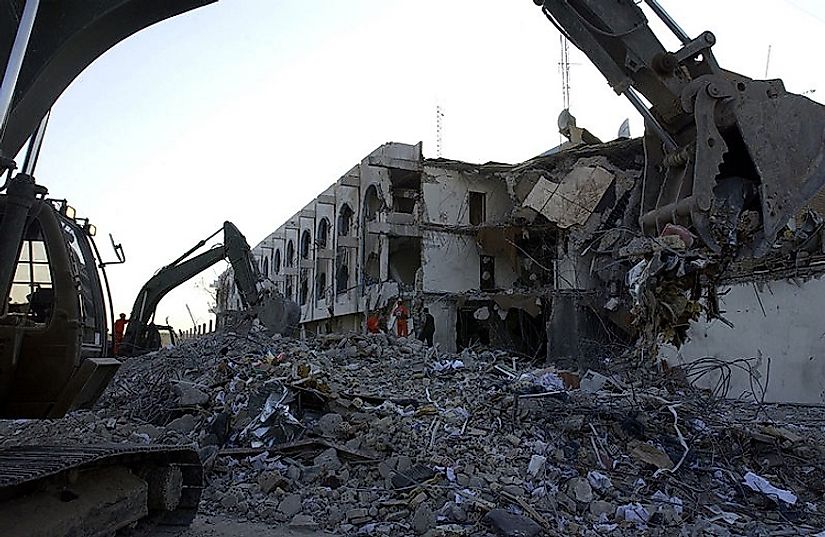 A United Nations building bombed in Baghdad in 2003 by a Salafi jihadist group taking religious fundamentalism to deadly extremes.

Religious fundamentalism refers to the belief of an individual or a group of individuals in the absolute authority of a sacred religious text or teachings of a particular religious leader, prophet,and/ or God . These fundamentalists believe that their religion is beyond any form of criticism, and should therefore also be forced upon others. Logical explanations and scientific evidences have no place in these belief systems if they work against their religious fundamentalists. For fundamentalists, religion dictates every sphere of their daily lives, and they also attempt to involve the entire society into their own belief system, often by the use of force.

The concept of modern religious fundamentalism was introduced with the publication of the The Fundamentals, a series of books published between 1909 and 1920 appealing to Christians to believe in certain religious doctrines of Christianity. The term ‘fundamentalist’ was soon used to describe a section of Protestant Christians who bore a separatist attitude towards modernity. In the later years, the term was used to relate to the most extreme believers of every religion in the world.

Fundamentalism Around the World

Many Islamic terrorist organizations, auch as al-Qaeda, Boko Haram, and ISIS, also hold fundamentalist attitudes, and regard Western civilization as the symbol of the secular modernization that is a threat to the traditional Islamic values. Unlike the Abrahamic religions, fundamentalism in Indian religions is much more subdued, though not completely non-existent. Hinduism, being the world’s most ancient religion, does not assign supreme authority to any particular sacred text, nor to a single prophet or God. Hinduism is a complex of multiple sets of beliefs advocated by a large number of holy texts, including the Vedas, the Bhagavad Gita, the Upanishads, and the Brahmanas. Hence, the universal beliefs of this religion continue to dilute the attitudes of its few fundamentalists. In the case of Sikhism, however, the Khalistan movement of the 1980s, which witnessed the assassination of Indian Prime Minister Indira Gandhi, is often labelled as a Sikh fundamentalist movement with the aim of achieving an independent Sikh state. Believers of Buddhism and Jainism exhibit very little fundamentalism, and, since these religions are based on the advocacy of peace and non-violence, violent enforcement of any kind is not practiced by the followers of these religions . However, the Soka Gakkai sect of Nichiren Buddhism in Japan, which denies the credibility of all other forms of Buddhism, is sometimes labeled as being fundamentalist.

Extreme fundamentalism in today’s world is responsible for much misery, claiming many lives of innocent people. A society with fundamental beliefs breeds a closed attitude towards life to the degree of paranoia, and in some cases nurtures aggressive behavior. Fundamentalism shuts off the doorway to the acceptance of modern ideas and scientific principles and exchange of thoughts among societies around the world. The difference between ‘good’ and ‘bad’ is clearly demarcated in such societies, and experimentation of any kind is not allowed. The right to say “no” is dissolved, and often those living in the same society, though initially non-believers, become subjects of “approval addiction”, wherein to earn respect and acceptance in their society they must start following the fundamentalist principles themselves, even though they might be unable to relate to them. Since fundamentalists do not lend ears to others’ voice, others may also be less inclined to hear them out. This breeds feelings of violence against others, and often leads to conflict. Fundamentalism is often practiced by believers to save their belief systems and traditions from being swept away by waves of modern change, but in the process they may become so entangled within the confines of their beliefs that they are unable to emerge from desperation without resorting to acts of violence and aggression.