What The Holy Qur’an And Traditions Say About Woman And Social Life
March 14, 2021 SFi Official
27

Slavery is deeply embedded in Islamic law and tradition. Although a slave-owner is cautioned against treating slaves harshly, basic human rights are not obliged. The very fact that only non-Muslims may be taken as slaves is evidence of Islam’s supremacist doctrine.

Of the five references to freeing a slave in the Quran, three are prescribed as punitive measures against the slaveholder for unrelated sin. They limit the emancipation to just a single slave. Another (24:33) appears to allow a slave to buy their own freedom if they are “good.” This is in keeping with the traditional Islamic practice of wealth-building through taking and ransoming hostages, which began under Muhammad.

A tiny verse in one of the earliest chapters, 90:13, does say that freeing a slave is good, however, this was “revealed” at a time when the Muslim community was miniscule and several of their new and potential recruits were either actual slaves or newly freed slaves. Many of these same people, and Muhammad himself, later went on to become owners and traders of slaves, both male and female, as they acquired the power to do so (there is no record of Muhammad owning slaves prior to starting Islam). The language of the Quran changed to accommodate slavery, which is why this early verse has had negligible impact on slavery in the Islamic world.

The taking of women and children as slaves, particularly during the conquests outside Arabia, belies the notion that Jihad was being waged in self-defense, since the enemy’s families reside neither with the Muslims nor (generally) on the battlefield. These were innocent people captured from their homes and pressed into slavery by Muhammad’s companions and successors.

Contrary to popular belief, converting to Islam does not automatically earn a slave his freedom, although freeing a believing slave is said to increase the master’s heavenly reward (Muslim slaves are implied in Quran (4:92)). As far as the Islamic courts are concerned, a master may treat his slaves however he chooses without fear of punishment.

By contrast, Christianity was a major impetus in the abolishment of slavery. Abolition had to be imposed on the Islamic world by the European West.

Given that there have never been abolitionary movement within the Islamic world, it is astonishing to see contemporary Muslims write their religion into the history of abolition. It is a lie.

There was no William Wilberforce or Bartoleme de las Casas in Islam. As mentioned, Muhammad, the most revered figure in the religion, practiced and approved of slavery. Even his own pulpit was built with slave labor. Caliphs since have had harems of hundreds, sometimes thousands of young girls and women brought from Christian, Hindu and African lands to serve Islam’s religious equivalent of the pope in the most demeaning fashion.

One of Muhammad’s closest companions was Umar, who became the 2nd caliph only two years after the prophet of Islam died. It is fair to say that he would have known Islam better than any contemporary apologist – those who say that slaves can only be captured in war and wars can only be waged in self-defense. He obviously did not agree with this.

Under Umar’s authority, Arab armies in Egypt invaded Black Africa to the south and attempted to conquer the Christian Makurians who were living there peacefully. Although the Muslims were held off, the Makurians had to sign a treaty to prevent recurring invasions. The terms of the Baqt included an annual payment of 360 “high quality” African slaves. The treaty stood for 700 years without the least bit of moral objection from generations of Muslim clerics and scholars.

Umar himself was stabbed to death by a slave whose liberty he refused to grant. In this case, the slave was captured during the campaign against Persia, one of many offensive wars waged by the Muslims against people who were not attacking them.

Modern day apologists trying to defend slavery under Islam generally ignore the basic fact that reducing people to property is dehumanizing. They distract from this by comparing the theoretical treatment of slaves under Sharia with the worst examples of abuse from the era of European slavery.  (“Fatwa 64 from ISIS instructs slave owners to “show compassion” and “kindness” to the women they rape.)

The first problem with this is that the actual practice of Muslim slavery was often remarkably at odds with the relatively humane treatment prescribed by Sharia. For example, according to the Ghanan scholar John Azumah, nearly three times as many captured Africans died in harsh circumstances related to their transport to Muslim lands than were ever even enslaved by Europeans.

A more insurmountable problem for the Muslim apologist who insists that slavery is “different” under Islam are the many examples in which Muhammad and his companions sold captured slaves to non-Muslim traders for material goods. The welfare of the slave was obviously of no consequence.

Some contemporary apologists interpret sex slavery as a favor done to the subject – a way in which women and children are taken care of in exchange for their sexual availability to the pious Muslim male.  Although morally repugnant in its own right, this is easily belied by the fact that slavery would be unnecessary if the arrangement were of benefit to the slave.

Another myth about Islamic slavery is that it was not race-based. In fact, it was. Muhammad’s father-in-law, Umar, in his aforementioned role as caliph, declared that Arabs could not be taken as slaves and even had all Arab slaves freed on his deathbed. This helped propel the vast Islamic campaign to capture slaves in Africa, Europe and Asia for import into the Middle East.

Literally millions of Christians were captured into slavery during the many centuries of Jihad. So pervasive were the incursions by the Turks into Eastern Europe, that the English word for slave is based on Slav.

Muslim slave raiders operated as far north as England. In 1631, a French cleric in Algiers observed the sale of nearly 300 men, women and children, taken from a peaceful English fishing village:

“It was a pitiful sight to see them exposed in the market…Women were separated from their husbands and the children from their fathers…on one side a husband was sold; on the other his wife; and her daughter was torn from her arms without the hope that they’d ever see each other again.” (from the book, White Gold, which also details the story of an English slave, Thomas Pellow, who was beaten, starved and tortured into embracing Islam).

The Indian and Persian people suffered greatly as well – as did Africans. At least 17 million slaves (mostly black women and children) were brought out of Africa by Islamic traders – far more than the 11 million that were taken by the Europeans. However, these were only the survivors. As many as 85 million other Africans are thought to have died en route.

Most telling, perhaps, is that slavery is still practiced in the Sudan, Niger, Mauritania and a few other corners of the Muslim world – and you won’t see any of those Muslim apologists (who shamelessly repeat the lie that Islam abolished slavery) doing or saying anything about it!

In fact, a fatwa (Islam Q&A 33597 originally at http://www.islam-qa.com/en/ref/33597) was recently issued by a mainstream Islamic source reminding Muslim males of their divine right to rape female slaves and “discipline” resisters in “whatever manner he thinks is appropriate”.  Not one peep of protest from Islamic apologists was recorded.

In 2013, the same site prominently proclaimed (Islam Q&A 10382 originally at http://www.islam-qa.com/en/ref/10382) that “there is no dispute (among the scholars) that it is permissible to take concubines and to have intercourse with one’s slave woman, because Allah says so.”

In 2003, a cleric in Saudi Arabia’s highest religious body declared, “Slavery is part of Islam. Slavery is part of jihad and jihad will remain as long as there is Islam. Those who argue that slavery has been abolished are ignorant, not scholars. They are merely writers. Whoever say such thing is an infidel.”

In 2011, Salwa Al-Mutairi, who is considered a women’s rights activist in Kuwait, suggested that Russian women be taken captive in battle and turned into sex slaves in order to keep Muslim husbands from committing adultery.

In 2014, al-Azhar (the Islamic world’s most prestigious university) proclaimed that Muslims can capture women in battle for sex slavery.  The woman making the announcement was Suad Saleh, a so-called ‘moderate,’ who said this at the very same time that thousands of Yazidi women were being horrifically raped by the Islamic State.

In 2016, a British imam who claims to be anti-extremist, affirmed the legitimacy of sex slavery to his followers.  The next year, a Kuwaiti Sheikh called enslaving unbelievers “one of the virtues of Islam.”  There have also been several modern-day fatwas endorsing the sexual abuse of non-Muslim women following capture.

After the Islamic State kidnapped and pressed into slavery thousands of Yazidi women and children in 2014, the caliphate issued an FAQ of sorts on slavery, which included rules on sexually molesting children: “It is permissible to have intercourse with the female slave who hasn’t reached puberty if she is fit for intercourse; however, if she is not fit for intercourse, then it is enough to enjoy her without intercourse.” The best that “mainstream” apologists could muster in response was a letter appealing to “the reality of contemporary times”, meaning that Islam has no fixed moral position on the rape of woman and children.

In 2016, a scholar at Egypt’s al-Azhar, the most prestigious Islamic school in the Sunni world, stated that non-Muslim women could be captured in a time of war become “property” and can be raped “in order to humiliate them.“

A 12-year-old girl taken captive by the Islamic State explained that her ‘master’ would pray before he raped her: “He told me that according to Islam he is allowed to rape an unbeliever. He said that by raping me, he is drawing closer to Allah.” Other sex slaves have been forced to pray before the rape or recite passages from the Quran during. When a Yazidi woman begged a caliphate member not to rape a little girl, he responded, “She’s a slave… and having sex with her pleases God.”

In 2017, African slaves were freed from captivity in Libya, where their Arab masters not only raped and starved them, but forced them to drink from toilets.  Groups like CAIR, which pretend to be concerned with “human rights,” never lifted a finger to help them.

A Quran memorization competition in 2015 offered slave girls as the top three prizes. Again, there were no voices of Muslim protest from elsewhere. As Uzy Bulut keenly observed, “A religion that encourages destructive rioting and killing over cartoons, but shows no sign of sorrow as little girls are sold and raped, does not have much to contribute to advancing civilization.”

An American apologist for Islam defended slavery in a 2020 interview, saying that “renting” labor is “better than owning.”

Since Muhammad was a slave owner and slavery is permitted by the Quran, the Muslim world has never apologized for this dehumanizing practice. Even Muslims in the West will often try to justify slavery under Islam, since it is a part of the Quran. 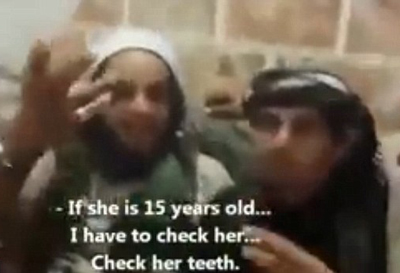 Video of Islamic State members at one of the caliphate’s sex slave markets in November, 2014. A price list was released setting the rate Yazidi and Christian girls between ages 10 and 20 at $130. Women between the ages of 20 and 30 were being sold for $86; a 30 to 40 year was being sold for $75 and 40 to 50 year old women were listed for sale at a price of $43.
The price list began with these words: “In the name of Allah, most gracious and merciful. We have received news that the demand in women and cattle markets has sharply decreased and that will affected Islamic State revenues as well as the funding of the Mujaheddin in the battlefield. We have made some changes. Below are the prices of Yazidi and Christian women.”