Skip to content
Al-Isra’ and Mi`raj: The Miraculous Night Journey

The Unexpected Intersection Of Islam And Sci-Fi
May 14, 2021 SFi Official

Prayers are the Mi’raj (ascension) of a believer to their Lord and a daily source of strength. With it, we rise to the Almighty every day, communicate and draw closer to Him. It was so special that no other revelations were conveyed directly to Rasulullah s.a.w. beside this Divine Decree of establishing the daily prayers. The event of Isra’ and Mi’raj is the miraculous night journey of Prophet Muhammad s.a.w that happened in a single night. This miraculous journey is marked as an important milestone in the Islamic calendar. The journey of al-Isra’ and al-Mi’raj consists of the journey from Makkah to Baitul Maqdis (Jerusalem), which is known as al-Isra’, and the ascension from Baitul Maqdis to the Heavens, known as al-Mi’raj.

This miraculous journey is believed to be both a physical and spiritual journey that Rasulullah s.a.w. had experienced, and was unimaginable during his time. While there is no unanimous agreement by scholars and Muslim historians on the exact date that this event had taken place, it is widely believed that this event had taken place on 27 Rajab, just over a year before the emigration of Prophet Muhammad s.a.w to Madinah.

Isra’ and Mi’raj hold great significance in the lives of the believers. At that time, it served as a sign of the greatness of Allah s.w.t. and His majesty. It was known to be a miraculous event as it also ascertained the Prophethood of Rasulullah s.a.w. beyond human comprehension. It was a period where the journey from Makkah to Jerusalem would usually take months to complete.

In fact, no other man was proven to have gone far and beyond the known universe. For Rasulullah s.a.w. to travel from Makkah to Jerusalem in one night and to the Heavens, and then return within a single night was beyond the human comprehension.

It was, therefore, a test of faith for the followers of Rasulullah s.a.w. and a display of Allah’s power and His grandeur. Allah s.w.t. explained this journey in the following Quranic verse:

“Exalted is He who took His Servant by night from Masjid al-Haram to Masjid al-Aqsa, whose surroundings We have blessed, to show him of Our signs. Indeed, He is the All-Hearing, the All-Seeing.”

The Context of Isra’ & Mi’raj

It is important to understand the circumstances and background that led to Isra’ and Mi‘raj. The episode occurred at a time when Prophet Muhammad s.a.w was faced with trials and tribulations. His emotions were tested with the passing of two of the most beloved people in his life. It was the year known as ‘Am al-Huzun or the Year of Sorrow.

His uncle, Abu Talib who was his ardent supporter and guardian when he was young, had passed on. His beloved wife, Khadijah r.a. who was the pillar of his life, the comfort of his eyes and heart, had also departed that same year.

Prophet Muhammad s.a.w. continued to serve God through serving humanity and persevered in delivering the message of Truth. Rejected by the Quraish tribe, Rasulullah s.a.w. went outside Makkah to the City of Taif with a deep hope that the people there would be more open to listen and welcome his message. 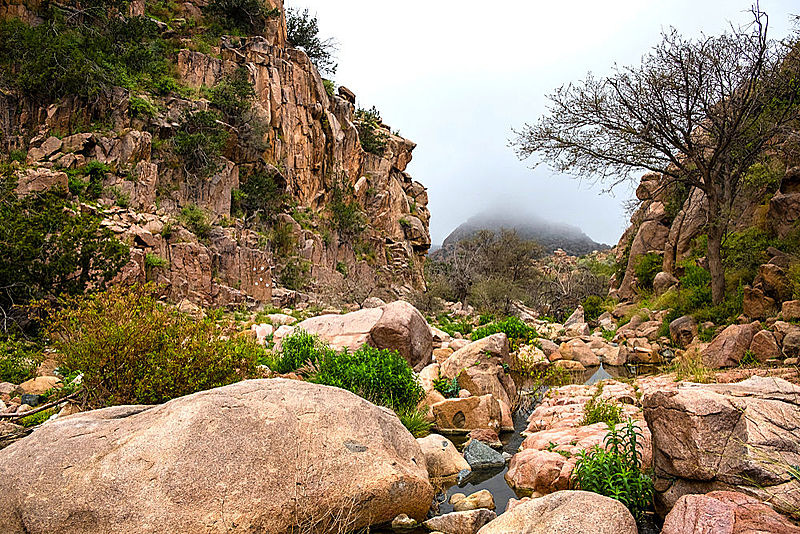 However, he was not only rejected by the People of Ta’if, but he was also humiliated and attacked. Stones were thrown at him that led him to be injured. Physically hurt and emotionally rejected, an angel was sent to Rasulullah s.a.w asking him if he would want the People of Ta’if to be destroyed for their violent acts against the Prophet s.a.w.

As a Prophet of Mercy and Love, Rasulullah s.a.w. forgave them. He prayed not only for them but for the future generations of Ta’if to be among those who will accept His message and be among the believers.

It was against this backdrop that Rasulullah s.a.w. was gifted by The Most Merciful with the special gift of performing this miraculous journey. It was the silver lining for the Prophet s.a.w who was facing intense hardship and had gone through trials and challenges. Truth be told, Allah s.w.t. does not forsake His servants, what more His beloved, Rasulullah s.a.w.

Al-Isra’: From Makkah to Jerusalem

The night journey and ascension narrative begin with Prophet Muhammad s.a.w. travelling with the angel Jibril a.s. on a heavenly creation called Buraq to “the farthest mosque” Masjid al-Aqsa, in Jerusalem. The Buraq is one of the animals of paradise and is described as “a white creature that is larger than a donkey but smaller than a mule, who would place its hoof (step) a distance equal to the range of his vision.” (Sahih Al-Bukhari)

In other words, the speed that it can travel transcends the known limitations, even today. In a hadith narrated by Imam An-Nasai and also mentioned in the tafsir of Ibn Kathir, Jibril a.s. asked the Prophet s.a.w. to dismount and pray at several points along the journey of al-Isra’. The first stop was at Taybah – which was to be the place that the Prophet would soon migrate to and name it the city of Madinah. Next, was at Mount Sinai, where Prophet Musa a.s received the revelation of the Torah from Allah s.w.t. And finally at Bethlehem, the place where Prophet Isa a.s. was born.

Al-Mi’raj: From Jerusalem through the Seven Heavens

The second part of the journey brings Prophet Muhammad’s ascension to the heavens with Jibril a.s. During the ascension, he met and exchanged greetings of peace with many other Prophets before him in various heavenly spheres.

When he finally reached the highest level in the heavens, he was brought into the Divine Presence of the Almighty Allah s.w.t, alone at Sidratul Muntaha (a boundary beyond which none may pass). It is said to be the boundary that has never been passed by anyone except by Prophet Muhammad s.a.w. Here, Rasulullah s.a.w. was given the Divine Decree for the believers to establish daily prayers.

Upon returning from the Sidaratul Muntaha, Prophet Muhammad s.a.w. encountered Prophet Musa a.s. In the tradition, it was described that Prophet Musa a.s told our beloved Prophet Muhammad s.a.w that the commandment could perhaps be too heavy for his people to follow. Understanding this, our beloved Prophet Muhammad s.a.w kept returning to Allah, The Most Merciful for a lesser number of obligatory prayers for his people. Our Prophet s.a.w is full of love and care for his followers, and this feeling was bestowed to him by Allah s.w.t. Eventually, the number of compulsory prayers were reduced to five. Upon being given that by Allah s.w.t, Rasulullah s.a.w did not wish to continue asking for more and from then, the practice of five daily prayers was established.

Today, Muslims pray to Allah s.w.t. five times daily, from across the globe, from mosques to houses and many places where prayers can be observed. After all, for Muslims, the earth is where we prostrate, and whenever we prostate that is the ‘masjid’ for us. 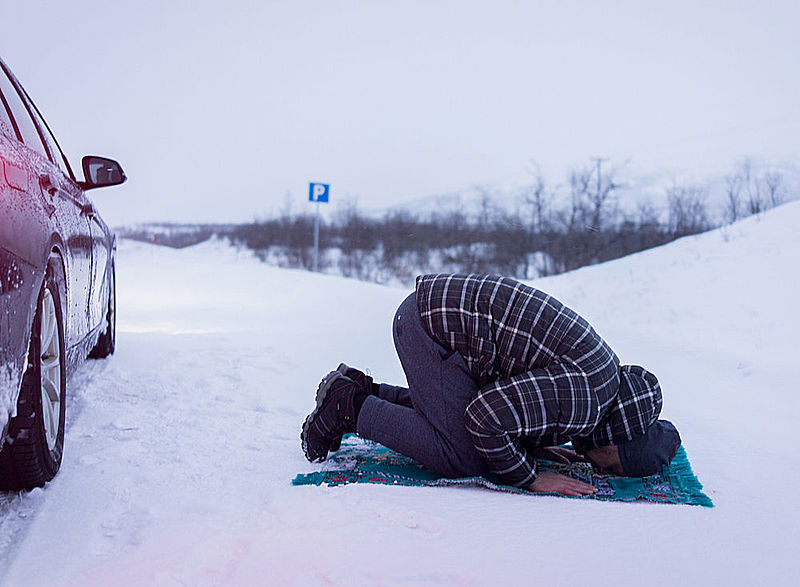 Returning Home: From the Seven Heavens to Makkah

The journey of al-Mi’raj ends with the Prophet s.a.w descending back to Masjid Al-Aqsa in Jerusalem. On his return home to Makkah, he saw various caravans in the outskirts and heading towards the city, which he would later describe to the people of Quraysh as proof that he had made this journey in less than a night. There were many who did not believe the Prophet and mocked him for making such a claim. The companions, however, never doubted this momentous event.

Therefore, this story was a source of wonder and hope, as it continues to be for us today. On this night, the best of creation s.a.w was given the honour of travelling to the heavens and was graced to meet the Divine Presence.

Considering its significance, it is important for us to commemorate this night journey by reflecting on the lessons and maximising our worship and good deeds. Prior to Isra’ Mi’raj, Prophet Muhammad s.a.w had displayed great patience in the face of hardship, and it is of Allah’s wisdom that He bestows His gifts and relief to be accompanied with hardships. After all, Allah s.w.t. says in the Quran,

It was here that Allah s.w.t. gave Prophet Muhammad s.a.w. His direct supervision, guidance and protection. It was also here that He revealed the gift of prayers. Prayers are the Mi’raj (ascension) of a believer to their Lord and a daily source of strength. With it, we rise to the Almighty every day, communicate and draw closer to Him. It was so special that no other revelations were conveyed directly to Rasulullah s.a.w. beside this Divine Decree of establishing the daily prayers.

The five daily prayers form a key pillar of Islam. Without prayers, our lives are devoid of the spiritual connection to Allah s.w.t. Our five daily prayers connect us to our Creator and pause us from this worldly life to devote ourselves to answer the call of our Master. 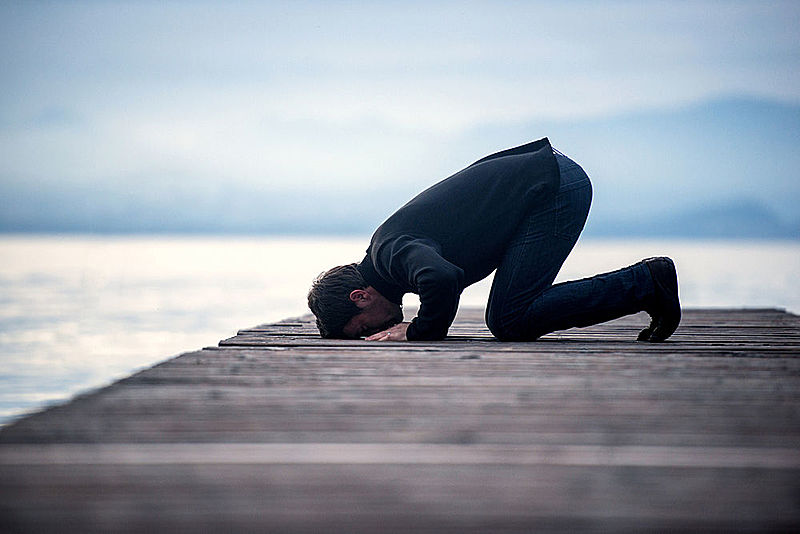 Today, as Muslims around the world are faced with the shutdown of mosques, let us ensure that our prayers can continue to be established. For we do not worship the House of Worship, but we submit to the Master of the House, our God, our Creator, Allah s.w.t.  May Allah s.w.t keep our hearts close to Him and accept our prayers and submissions, Amiin.

*This article was jointly written with Ustaz Ridhwan Mohd Basor.

To know more about the lessons we can learn from this epic and miraculous journey, read 4 Powerful Lessons From Isra’ Miraj here.