Isra and Mi’raj, also known as Al Isra’ wal Miraj, is observed on the 27th day of the month of Rajab, the seventh month in the Islamic calendar. This event marks the night that Allah (God) took Mohammad (also known as Mohamed or Muhammed) on a journey from Mecca to Jerusalem and then to heaven. 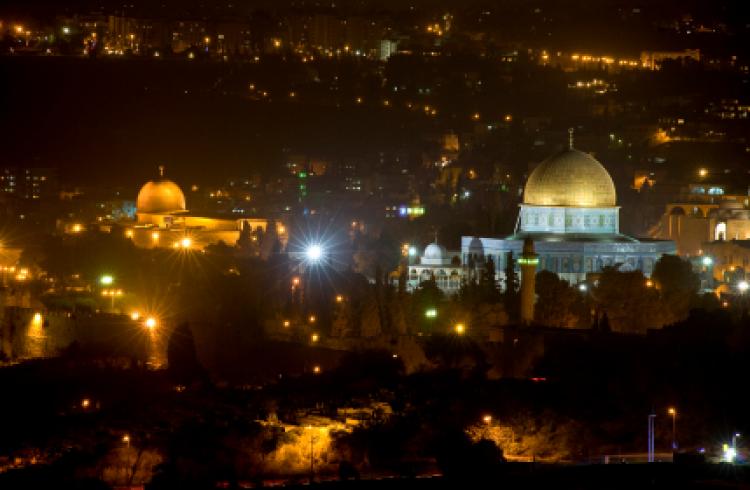 The Prophet Mohammad traveled from Mecca to Jerusalem, pictured above.

Customs around Isra and Mi’raj vary between different Islamic communities. Some people spend the evening or night listening to or studying the story of Isra and Mi’raj in a mosque or at home. They may also decorate their homes or communities with candles or small electric lights and share food, particularly sweets, with each other or prepare a communal meal. People in some communities make a special effort to include children in the celebrations and explain the story of Mohammad’s journey.

Isra and Mi’raj is not a public holiday in countries such as Australia, Canada, the United Kingdom and the United States. However, there may be some local congestion in the evening on roads around major mosques.

The Prophet Mohammad (also written as Muhammad) lived in and around the area that is now Saudi Arabia in the years 570 CE to 632 CE in the Gregorian calendar. According to Islamic belief, God (Allah) took him on a two-part journey sometime around the year 620 CE. The first part of the journey, known as Isra, was from Mecca to the “furthest” mosque. There is some debate about the “furthest” mosque’s location. Some Muslims believe that it signifies a mosque that was far away from Mecca, while others believe that is was the Dome of the Rock (Masjid Qubbat As-Sakhrah) on the Temple Mount (Haram al-Sharif) in Jerusalem.

It is believed that Mohammad was shown heaven and hell in the second part of the journey, known as Mi’raj. He talked with many prophets, including Jesus and Moses, in heaven. He also received instructions on Islamic prayer. Mohammad returned to Mecca before the end of the night. Some Islamic scholars regard Mohammed’s journey as a spiritual experience while others see it as a physical journey. His journey is remembered and commemorated on Isra and Mi’raj.