Akhirah is the term for life after death. Muslims believe that no soul may die except with God’s permission at a predestined time (Qur’an 3:145). This links with the belief of al-Qadr. Belief in life after death is important within both Sunni and Shi’a Islam as it relates to both the six beliefs of Islam (Sunni) and the five roots of Usul ad-Din (Shi’a).

Before Muslims go to Jannah or Jahannam, they go to Barzakh. This is where souls wait before the Day of Judgement. It is also a place that divides the living from the dead.

Once the soul has passed this stage, it goes on to the Day of Judgement, where it is judged by Allah. When they are judged, Muslims have to accept the consequences of how they behaved in their life.

[It will be] the Day when no soul shall have power [to do] aught [ie anything] for anotherQur’an 82:19

From the Day of Judgement, Muslims go to either Paradise or Hell. 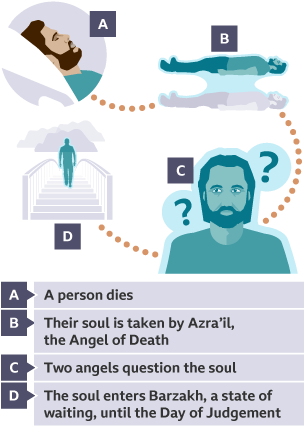 Muslims believe they get to Paradise by living religiously, asking Allah for forgiveness and showing good actions in their life. These good actions will be rewarded on the Last Day. Therefore, obeying the rules set by Allah is of ultimate importance.

Hell is described as a place of fire and torment. Jahannam is a place of scorching fire pits and boiling water, a place of physical and spiritual suffering. Vivid descriptions of hell are used in the Qur’an as a way to stop Muslims from participating in sin.

Muslims believe that they will be sent to Hell if they reject the teachings of the Qur’an or take no responsibility for their actions. Either of these would mean that they had failed Allah’s test.

Some Muslims believe that even the souls in Hell can eventually be sent to Paradise.

These beliefs give Muslims the motivation to follow the teachings in the Qur’an. They also give hope to those who suffer that there is something better to come in the future.

How is Heaven described in the Qur’an?