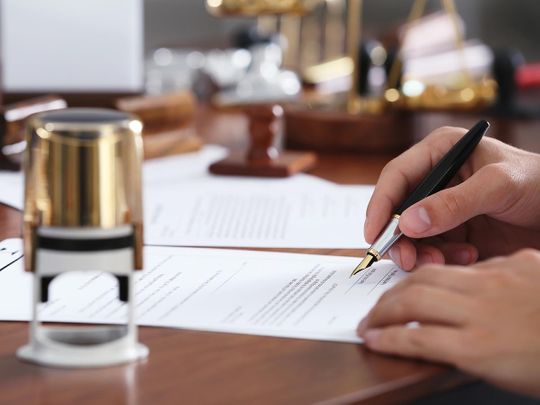 Dubai: Can Muslim expatriates in the UAE make a will to bequeath their assets and wealth as per their preference? Or is Shariah law applied on how the inheritance is distributed to the surviving members?

Gulf News spoke with Mazen Boustany, Partner at Baker McKenzie Habib Al Mulla, who said that the way inheritance is distributed for Muslims in the UAE depends on who the surviving heirs are.

“Court of First Instances looking at inheritance and probates are Sharia courts and the judges apply Shariah [laws]. The Courts have considered that a Muslim, whatever his nationality, will have Shariah law applied to him or her. It is unclear whether the situation has changed under the recent amendments to the Personal Status Law. I believe that it would not change,” Boustany said.

So, can a Muslim expatriate make a will?

According to Shariah law, a Muslim can bequeath a certain percentage of his or her assets based on a will, but it has to be given to a non-heir.

“Muslims can give away up to a third of their assets to a non-heir, the rest are distributed as per the Shariah law,” Boustany said.

This would mean that if a Muslim man wishes to give part of his wealth to his surviving wife who is Christian or Jewish (as they are not an heir as per Shariah), he can do so, but only up to one-third of the total wealth.

This would also allow an individual to give away part of their wealth in charity, but again to a maximum of one-third of their assets.

Muslims can give away up to a third of their assets to a non-heir, the rest are distributed as per the Shariah law

How is the inheritance distributed?

According to Boustany, the distribution of assets can vary quite a bit depending on who the surviving members of the family are, as there are set percentages of the wealth allocated based on the principles of Shariah law.

For example, if a person has two daughters, they will inherit two-thirds of the assets, while the rest will be distributed to the remaining heirs, if any.

Boustany further clarified how assets would be distributed in a few other scenarios.

In the case of death of a man who is survived by his wife, two sons and two daughters, the asset distribution would be as follows:

In case the man is survived by his parents, his wife, a son and two daughters, this is how his assets would be distributed:

In case a woman is survived by her husband, two sons, a daughter and her parents, this is how her assets would be distributed:

Does this apply to my assets outside the UAE?

Boustany also clarified that for Muslim expatriates, the courts would only apply the rulings to money, property and other assets that are within the UAE. In case the expatriate man or woman has assets in other countries, the respective country’s laws would be applicable.

What is the Islamic perspective on wills and inheritance?

Gulf News spoke with Dr Ahmed bin Abdulaziz Al Haddad, Grand Mufti, Director of Iftaa Department at the Islamic Affairs and Charitable Activities Department in Dubai, regarding inheritance and wills for Muslims, who said that writing a will is an extremely important step for Muslims and that inheritance distribution is determined based on what is mentioned in the Quran.

“Writing a will, in general, is encouraged in Islam. If a person has rights that he owes or are due to him, which have not been documented in writing or by witness testimony, then it is obligatory,” Dr Al Haddad said.

He added: “Imam Al Bukhari and Muslim (two scholars who have compiled narrations of Prophet Muhammad [PBUH], called ‘hadith’) narrate in their Sahih (authentic) hadith collections from the hadith of Abdullah Ibn Umar (a companion of Prophet Muhammad [PBUH]), that the Messenger of Allah [PBUH] said: ‘A Muslim who has something to be left in a will has no right to sleep two nights without having a written will.’ This is indicated by the verse: ‘After a will he leaves or a debt.’ [An-Nisa’:11] in three consecutive verses. This is to protect rights from being lost, as someone might depart to his Lord while indebted to people who have no proof of the debt and hence their rights will be lost. As a result the person will remain imprisoned by his debt until it is paid off, as narrated by Imam Ibn Hajar from the hadith of Anas that the Prophet [PBUH] attended a funeral prayer and said, ‘Does he owe a debt?’ They said, ‘Yes.’ He said, ‘Gabriel has forbidden me to pray on someone who owes a debt.’ Then he said, ‘One who owes a debt remains mortgaged in his grave until it is paid off.’”

Writing a will, in general, is encouraged in Islam. If a person has rights that he owes or are due to him, which have not been documented in writing or by witness testimony, then it is obligatory.

How is the inheritance distribution determined?

“Inheritance in Islam is explicitly clarified in the Noble Qur’an and Sunnah,” Dr Al Haddad said.

He then referred to the following verses (11 and 12) of Chapter 4 of the Quran:

‘Allah thus commands you concerning your children: the share of the male is like that of two females. If (the heirs of the deceased are) more than two daughters, they shall have two-thirds of the inheritance; and if there is only one daughter, then she shall have half the inheritance. If the deceased has any offspring, each of his parents shall have a sixth of the inheritance; and if the deceased has no child and his parents alone inherit him, then one-third shall go to his mother; and if the deceased has brothers and sisters, then one-sixth shall go to his mother. All these shares are to be given after payment of the bequest he might have made or any debts outstanding against him. You do not know which of them, your parents or your children, are more beneficial to you. But these portions have been determined by Allah, for He indeed knows all, is cognisant of all beneficent considerations.’

‘And to you belongs half of whatever has been left behind by your wives if they die childless; but if they have any children then to you belongs a fourth of what they have left behind, after payment of the bequest they might have made or any debts outstanding against them. And to them belongs a fourth of what you leave behind, if you die childless; and if you have any child then to them belongs one-eighth of what you have left behind, after the payment of the bequest you might have made or any debts outstanding against you. And if the man or woman has no heir in the direct line, but has a brother or sister, then each of these shall inherit one-sixth; but if they are more than two, then they shall inherit one-third of the inheritance, after the payment of the bequest that might have been made or any debts outstanding against the deceased, providing that the bequest causes no injury. This is a commandment from Allah; Allah is All-Knowing, All-Forbearing.’

“This is very clear in specifying who has a fixed inheritance of a half or a quarter or an eighth, or two-thirds or a third or a sixth, and who receives the remainder after the fixed amounts have been distributed, as narrated by Bukhari and Muslim (in their hadith compilations) from the hadith of Ibn Abbas that the Prophet [PBUH] said, ‘Distribute the fixed inheritances, and the remainder is for the closest male relatives’,” Dr Al Haddad said.

The allocation of inheritance

“The philosophy of division of inheritance in Islam is built on the two principles of relationship and need, so no relative is neglected, whether forbearers or progeny, but they differ in need. The need of a son is greater as he starts a family and provides for it, as opposed to a daughter, who must be provided for by her father or son or husband. The same is true for sisters. Hence, a man inherits twice the lot of a woman if they inherit together and are of the same relationship to the deceased. This is only the case in five situations. If the inheritors are all daughters, a single daughter or sister inherits half of the inheritance. If there is more than one daughter or sister, they inherit two thirds of the inheritance between them. If the mother inherits alone, or only with the father, she receives a third of the inheritance. If there are also sons or brothers among the inheritors, she receives a sixth. This is the situation of women with men; sometimes they inherit the same as a man, sometimes more than him and sometimes less depending on the degree of kinship to the deceased and the reason for inheritance,” Dr Al Haddad said.