There was a sense of deja vu last week when Saudi Arabia’s crown prince, Mohammed bin Salman, unveiled his plans for a futuristic 100-mile-long linear city, momentously titled The Line. The dramatic promotional video showed aerial views of a glowing urban ribbon cutting right across the country, forming a “belt of hyperconnected future communities” from sea to sea. It will be free from cars, he declared, powered by renewable energy and run by artificial intelligence, slicing straight through the Arabian desert in one continuous strip. As part of the country’s $500bn Neom development, the plan was trumpeted as a “civilisational revolution that puts humans first”; but it had inescapable echoes of another project with a very different purpose.

Three thousand miles away, in a gallery in Brussels, hangs a 1960s photomontage of an eerily similar vision, part of a new exhibition about the radical Italian architecture collective Superstudio. A great white oblong is depicted cutting through a desert, slicing through sand dunes and marching past palm trees in an unbroken urban block, its surface inscribed with an endless square grid. 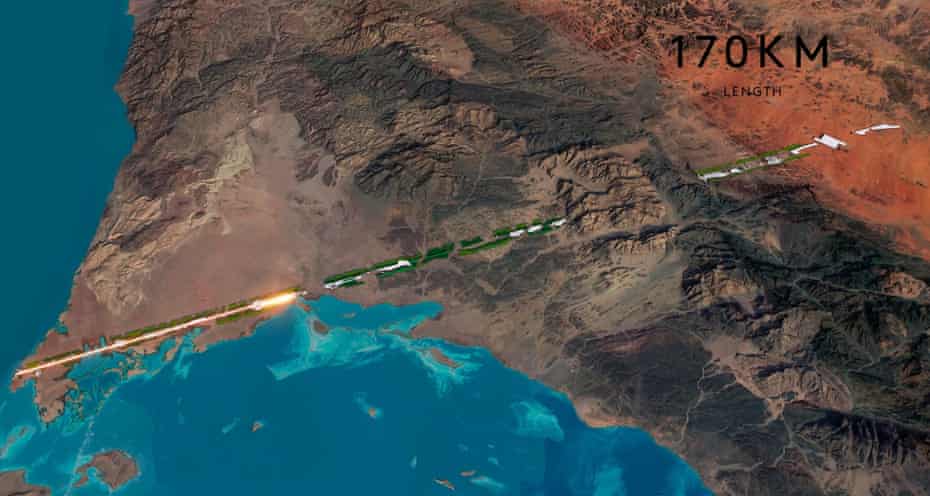 This is the Continuous Monument, a project dreamed up by Superstudio in 1969 – not as a proposal for a smart city, but as a critical warning against the relentless urbanisation of the planet. In a striking series of collages the designers depicted the vast blocky mass encircling the globe with an unstoppable belt of development, dwarfing the rocky outcrops of Utah’s Monument Valley, engulfing the Amalfi village of Positano and conquering Manhattan’s gridiron with its own inexorable grid.

The images were alarming, but also seductive, and they remain so today. Part endless office block, part minimalist land art, the powerful montages show the monument cutting across fields, mountains and seas in one pristine blank strip, imposing Cartesian order over the natural world. Adolfo Natalini, a founding member of Superstudio, later described the project as a “negative utopia,” a warning against “the horrors architecture had in store, with its scientific methods for perpetuating standard models worldwide”. But, at the time, the group’s intentions were more ambiguous, and often lost in translation.

Influential … a design for a Superstudio house from 1969. Photograph: Superstudio Migrazioni

Published around the world, the images took on an enigmatic aura, like the black monoliths in the sci-fi film 2001: A Space Odyssey, released a year earlier. Was this a caution against the encroachment of suburban mall development, or a proposition for a sublime form of ultra-sleek modernism, celebrating the latest in curtain wall technology? Either way, Superstudio’s slick visual style and equivocal position would influence the nature of architecture student projects, and practice, for decades to come.

The timing of the exhibition is fitting, and not just because of the outlandish Saudi parallels. Superstudio grew out of a sense of global crisis and impending doom similar to today’s, after the young architecture students witnessed a dramatic flood that devastated much of Florence in November 1966. As the group’s co-founder Cristiano Toraldo di Francia remarked, the flood transformed Florence into a continuous surface, from which the city’s domes and spires emerged, “transforming the hard, stone support surface of its buildings into a moving liquid mixed with mud”. What they saw posed “a radical challenge to the traditional relationship between architecture and ground, city and country, interior and exterior” that would inform their later speculations.

The young designers were also part of a student branch of Operaismo, a left-wing political movement championing the workers’ struggle, involved in calling for academia to be opened up to reflect the social changes and experimental artistic currents of the time. One month after the flood, Toraldo di Francia and Natalini founded Superstudio, joined by Alessandro and Roberto Magris and Gian Piero Frassinelli in the following years, to fight back against the prevailing orthodoxies. 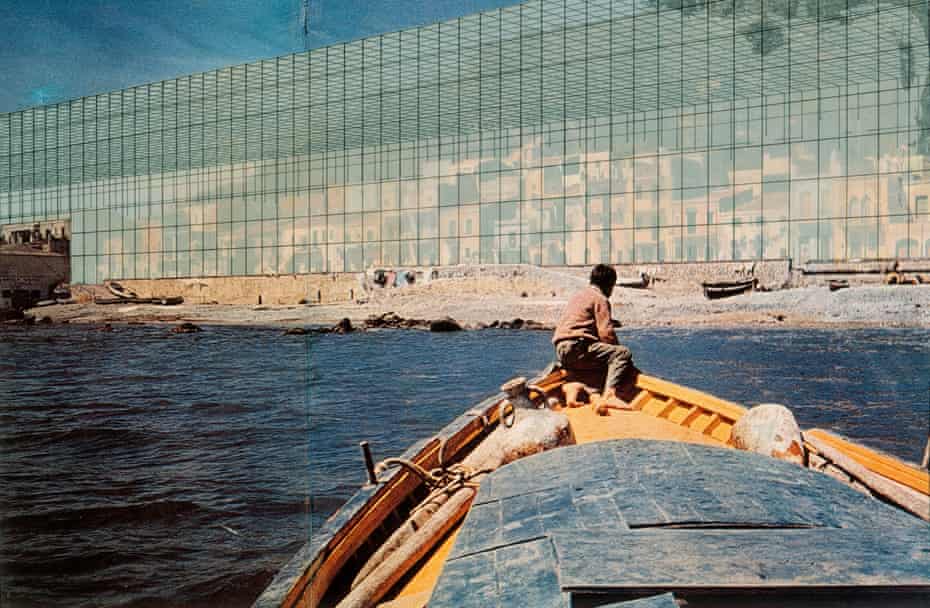 They felt that modernism had run its course, and was responsible for regurgitating steel-framed boxes and concrete highways across the world, while rampant consumer culture was leading to an impending social and ecological crisis. “If design is merely an inducement to consume,” said Natalini, “then we must reject design. If architecture and town planning is merely the formalisation of present unjust social divisions, then we must reject town planning and its cities until all design activities are aimed towards meeting primary needs.” It might sound nihilistic, but it would also be tempered with a good dose of fun.

I took their work literally. I thought some of it would be stunning if built

Over the next 12 years, these youthful provocateurs would make their case with satirical photomontages, furniture designs, films and exhibitions, becoming one of the most influential architecture groups of the era – without building a single thing.

The Brussels exhibition (which is now open to limited numbers of visitors with pre-booked slots) brings together a wealth of material, from the group’s early “Nature Super” furniture, with colourful sofas and lamps in the form of waves, flowers and rainbows, to sensual designs for shop interiors, to a speculative catalogue of ideal villas, and the later “anti-architecture” work that sees the planet consumed by a networked “supersurface” inhabited by primitive nomads. The ubiquitous grid becomes all-consuming, leaping off the page at one point to form a collection of furniture, spawning a range of rectangular chairs, stools and tables covered in white plastic laminate, simply inscribed with a square grid of thin black lines. The mute, blank surface – as if folded from graph paper – was a repudiation of the world of design. 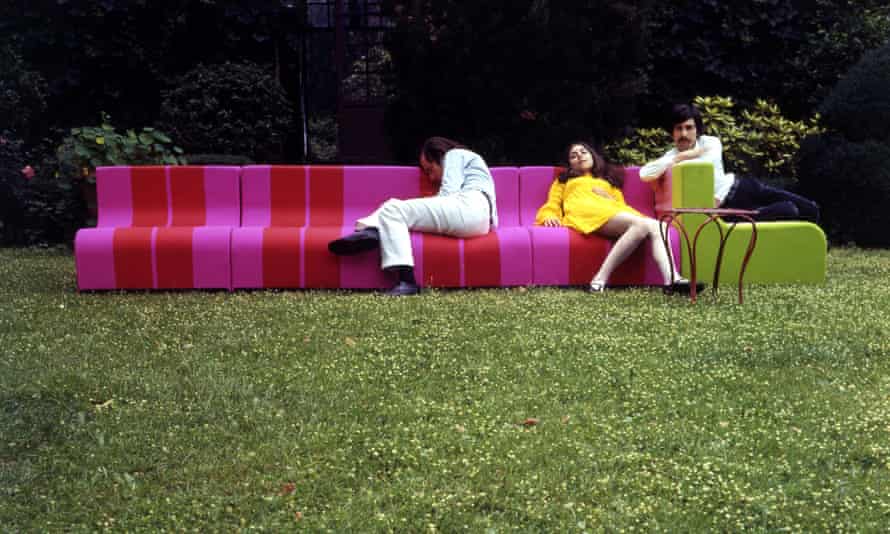 “At that time,” said Superstudio, “it was obvious that to continue designing furniture, objects and similar household decorations was no solution to the problems of living, nor to those of life; even less was it serving to save the soul.” That didn’t stop them from signing a contract with furniture company Zanotta to produce their blocky range. It is ironic, for a group of self-styled anti-design neo-Marxists, that their surviving commercial output is a laminate-covered MDF table that retails for £4,000. Perhaps it’s a joke from the grave, on anyone extravagant enough to buy one.

Ultimately, it is Superstudio’s consummate talent as image-makers that is their lasting legacy – a strength explained by their backgrounds. Natalini had trained as a painter and was influenced by British pop art, reproducing large format photographs in bold, bright colours, while Toraldo di Francia had worked as a professional photographer on advertising campaigns, and had evident skill with a scalpel. Roberto Magris was an industrial designer and graphic artist, while Frassinelli brought a strong interest in anthropology to the group. While the work is often clouded by verbose and arcane theorising, it is the images themselves that endure, even if their meaning has sometimes been misunderstood by their fans. 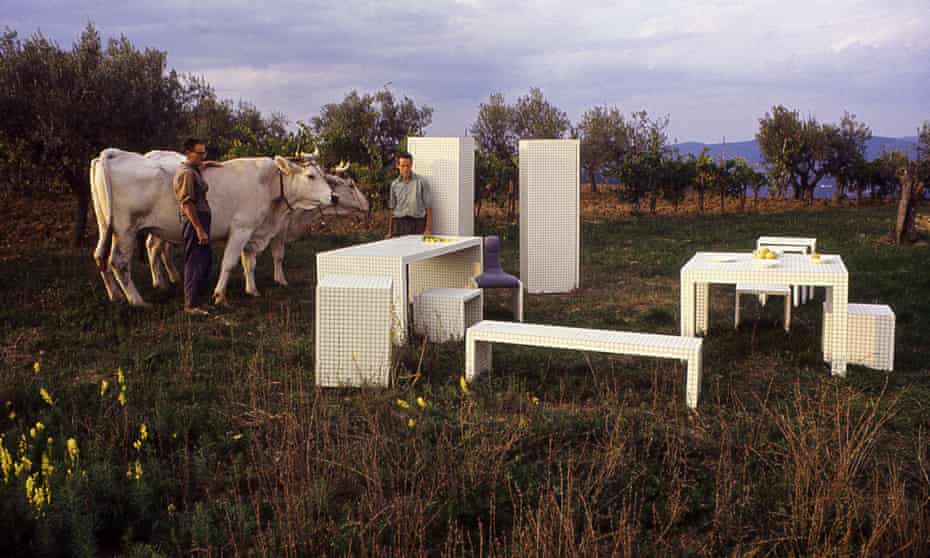 A case in point is the Dutch architect Rem Koolhaas, who encountered the photomontages of the Continuous Monument while he was a student at the Architectural Association in London. He was immediately enrapt. “I loved Superstudio because I took the work literally,” he explains, in an interview in the exhibition catalogue. “I thought some of it would be stunning if built.”

Koolhaas struck up a friendship with the group and invited them to lecture in London, but he gradually realised that the architecture he hoped to see built was intended to remain on paper, in the realms of critical commentary. He was stunned when Natalini went on to build thoroughly postmodern, neo-vernacular buildings in the Netherlands later in life. “That was the paradox of my affinity with [Superstudio],” he says. “It wasn’t clear whether I had respect for something that was actually a misinterpretation of their work or whether at that time I appreciated their true intentions.” He is not alone – it seems that Mohammed bin Salman might have missed the mischievous Italians’ irony too.

Superstudio Migrazioni is at Civa, Brussels, until 16 May.