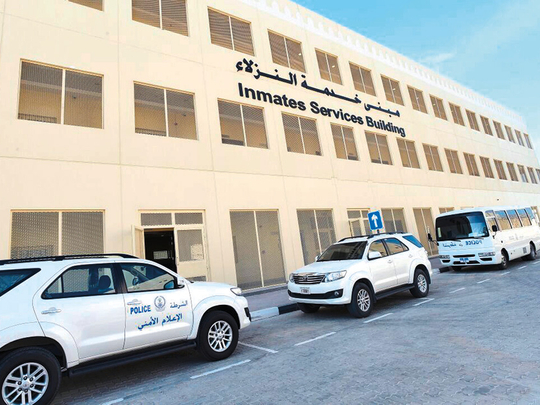 Sharjah: The Sharjah Punitive and Rehabilitation Establishment is taking a number of steps to offer better facilities to inmates at correctional facilities in the emirate – and now offers delivery service of official documents, including passports, to the family of inmates or government departments or public prosecution.

The first-of-its-kind service in the country has been provided since August 22. Twenty-one applications have been submitted under this service since its launch.

“The initiative aims to simplify the process for the inmates and their families to complete their transactions in the shortest possible time, in addition to reducing the burden of the families who come from other emirates and far-off destinations,” Brig Shuhail said.

Now, documents can be sent to any emirate at the same price. In one incident last week, a man in Khor Fakkan had requested for the passport of his convicted son. On the second day after he got his request registered, he received his son’s passport. He thanked the facility and the staff for such a quick response and delivery.

The initiative aims to simplify the process for the inmates and their families to complete their transactions in the shortest possible time, in addition to reducing the burden of the families who come from other emirates and far-off destinations.

Lieutenant Sultan Kanon Al Shamsi, Director of the Strategy and Performance Development Branch at Sharjah Punitive and Rehabilitation Establishments, told Gulf News that the Punitive and Rehabilitation Establishments allows users to reach out to them via their WhatsApp number 065989915. The service is available in three languages: Arabic, English and Urdu.

Previously, physical presence of the applicant was mandatory. The inmate, therefore, had to issue a Power of Attorney to a family member in order to complete the transaction.

There are specialised employees inside the prisons who inform the inmates about the service, which some of them have availed of already. The cost of the document delivery service is Dh12 for each delivery. He said the facility aims to convert the Customer Happiness Centre to a 100 per cent digital platform.

How the delivery system works:

— First, place a formal request to avail the service.

— The request must be made by a relative of first degree — including father, mother, brother or sister.

— Send the request to the facility via WhatsApp, including a copy of the Power of Attorney.

— The document is delivered within 24 hours of submission of the request.

— The service is available for all emirates in the country at Dh12 for each delivery.

— Individuals bear the cost of the service while for government agencies, Sharjah Police bears the cost.

Circumstances under which the service can be availed:

*Inmate has been released, but the passport is still with the institution.

*Those who have been provisionally released to offer them an opportunity and have been put under observation for a year.

*Request for a replacement (an order to replace a passport for a convicted or arrested person).

*Requested by State Courts and Prosecutions (for bail or release)

*Ending the course of a case.

*Renewal or issuance of a passport at the embassy or consulate.