Skip to content
Muslims love Jesus, too: 6 things you didn’t know about Jesus in Islam 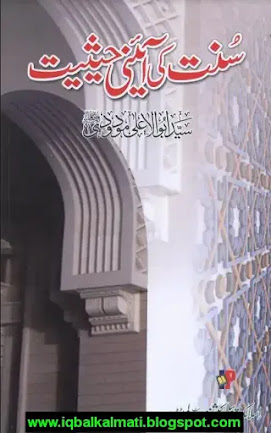 Syed Abul Ala Maududi Book Sunnat Ki Aaeeni Hayseeat PDF Download or free read online from this Islamic Urdu books collection. Book Name The Constitutional Status of Sunnah Author by Maulana Syed Abul-Ali Maududi Pages are 260  and Publisher is Islamic Publications (Pvt) Ltd., Mansura Multan Road, Lahore. The fitna of denial of Sunnah first arose in Islamic history in the second century, AH and its bearers were Kharijites and Mu’tazilites. The Kharijites needed it because the anarchy they wanted to spread in the Muslim society was hindered by the Sunnah of the Prophet (peace and blessings of Allaah be upon him) which established the society in a disciplined manner. Was, and in its path were the instructions of the Holy Prophet in the presence of which the extremist ideologies of the Kharijites could not function. On this basis, he adopted a double policy of doubting the authenticity of the hadiths and refusing to follow the Sunnah. The Mu’tazilites needed it because of the doubts that arose in their minds about Islamic beliefs and principles and rules as soon as they first appeared before the Ajami and Greek philosophies, before they fully understood them, Somehow they wanted to solve it. In these philosophies themselves, he did not have the insight to critically examine his health and strength. He considered everything that came in the name of philosophy to be a requirement of the whole intellect and wanted the beliefs and principles of Islam to be interpreted in such a way that they would conform to these so-called rational requirements. In this way, the same hadith and Sunnah became an obstacle. Therefore, like the Kharijites, they also cast doubt on the hadith and refused to accept the Sunnah as an argument.

In this book, Maulana Maududi has stated the opposing arguments one by one in such a way that there is no room left after that. Sayyid Maududi writes at the end of the book: “By taking a detailed look at each argument and reading what we have discussed, every learned person can form his own opinion as to how much weight these arguments carry and how much they compare. How weighty are the arguments we have established on the authenticity of the source of Sunnah, the law, and the hadiths? We especially urge the self-appointed judge and the Chief Justice of the West Pakistan High Court and his colleagues to consider our criticism carefully and if in their unbiased opinion, such as a Supreme Court The opinion of the superior judges of the court should be unbiased. If this criticism is based on really strong arguments, then they should take some measures in accordance with the law so that this decision does not become a precedent for the future. The dignity of the courts is the lifeblood of every country’s justice system and to a large extent, the stability of a nation depends on it. There is nothing more detrimental to this prestige than the fact that the decisions of the country’s highest courts are based on scientifically weak arguments and insufficient information. Therefore, it is imperative that when such a mistake is pointed out by honest criticism, the rulers themselves, at the earliest opportunity, should pay attention to its compensation. ”For those who have doubts about the hadith, It is very important to read the book. You may be read Parda  and Masala e Jabar o Qadar or  Quran Aur Paighamber by Abul Ala Maududi 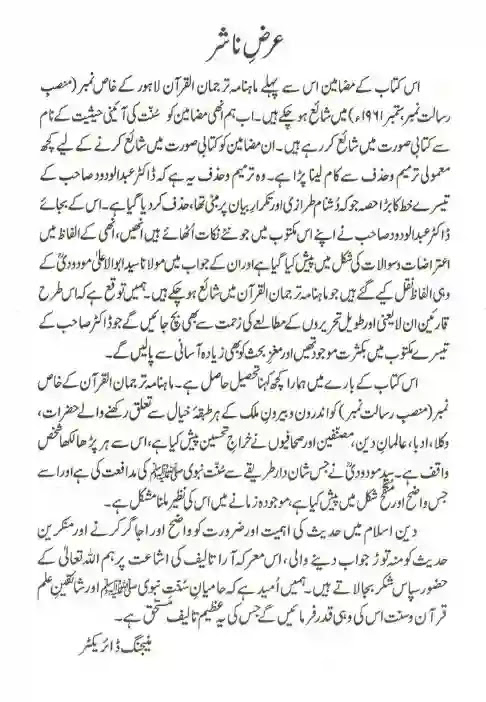